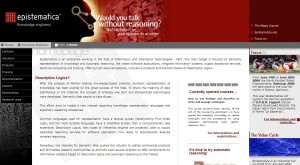 The new Epistematica’s Website was issued on 1st June 2012.

The old Website was on-line for seven years and it did its duty. Thank you, old chap!

We have to look back at the old Website for several reasons.

First of all, it contained striking iconography and slogans.

Secondly, at the first stage of its development Epistematica already addressed on its old website some of the today most debated issues. Already in 2005, Epistematica was engaged in doing what only recently has drawn the attention of many companies and analysts.

We discussed Semantic Web Standards because we understood what Sir Tim Berners-Lee talked about.

The old home page showed the strategic business partnership with our friends of Racer-Systems — the creators of Racer Pro that is one of the most outstanding Reasoners worldwide. In the training section of the old Website, we explained the use of Racer Pro together with Protégé – the most popular ontologies’ editor – to explain the concepts of the Semantic Web to the students in Philosophy, during our seminars. 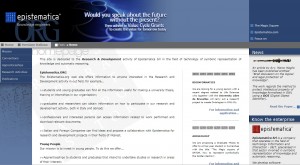 The old Website had a dedicated section for Epistematica’s research activities — using the specific domain, Epistematica.org.

We also showed how to develop: plug-in for Protégé, Knowledge-bases for documents and other digital objects, graphical applications to show datasets using automated reasoning, semantic layers for standard applications, etc …

At that time, those activities were so innovative that quite hard to understand in their real significance.  In the majority of cases, people believed that the Semantic Web was another thing: It was regarded ad something for automatically retrieving the meaning of web pages. Resources and time have been spent to build useless applications — like Semantic Search Engine — to lower the noise returned from the information retrieving process. But they were only applications of the traditional Knowledge Management – management of dematerialized documents – that is human knowledge represented in a natural language for human users.

On the contrary, Tim Berners-Lee thought at Semantic Web as the Web of Data. The semantics was the formalization of knowledge about data – knowledge represented in a formal mode for computing purpose and not for human users. Epistematica has given its contribution to this clarification process.

We hope that the clarification made by W3C about Semantic Web and its applications, like Linked Data, will further the development of companies like Epistematica.

Thanks to ESA and its team that first believed in Epistmatica’s ideas when they were really space-age ideas.