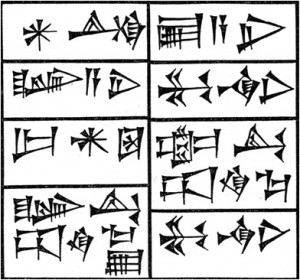 The knowledge representation of a sumerian text from the third millennium B.C.
by Sergio Alivernini and Marco Romano
2006, Rome, Italy

The principle characteristic of sumerian text is that it is, unlike most known languages, a agglutinating language, that is the words of the vocabulary are unchangeable and their variations (for example to change a name from singular to plural) do not modified the word directly as happens in English (Dog ? Dogs), but add a particle (suffissex, prefixes) or repeat a word (lugal = the king ? lugal-lugal = the kings). This characteristic makes it particularly suitable for the construction of an ontology of the grammar because it is (at least at the current state of knowledge) very much poorer and much more formal than most other languages.

The work carried out demonstrates how its possible to apply the technologies of the Semantic Web also to a natural language. The grammar expressed in this ontology is only partial, however the road taken seems to be the correct one and if revised and integrated this ontology would definitely represent a new and important instrument to study Assyriology.

For those interested here are some very important sites: