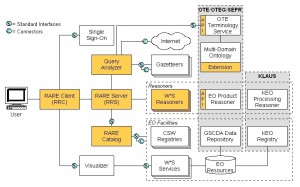 Epistematica and Space Application Services are involved in the RARE Project of the European Space Agency.

The demand for aerial and spatial imagery, and derived products, has been increasing over the years. At the same time, the technology has evolved allowing to produce a bigger variety of data with an increasing quality and accuracy. As a consequence of these advances, and the multiplication of deployed sensors, the amount of Earth Observation data collected and stored has exploded. For example, Envisat, launched in 2002, transmits 280 gigabytes of data every day, while the first three satellites of the Sentinel constellation beam together around 10,000 gigabytes in the same period.

Better and more accurate data allow for new kinds of applications to be developed. Current high precision images permit analyzing phenomena that were not visible before.

EO data have been recognized as critical to support major applications such as disaster and crisis management, and environmental (land, ocean and atmosphere) monitoring. Recently, decisions have been taken to ensure EO data will be available to anyone who needs them (see: Open access to Sentinel missions data: http://www.esa.int/esaEO/SEMXK570A2G_environment_0.html).

Data holders are now facing the problem of facilitating the access to their resources. Several initiatives have been taken during which Web portals have been developed allowing for resource providers to publish their services, and end-users to search for and obtain the EO products. ESA’s Service Support Environment (SSE) is one such portal.

These portals are however still too complex to be used by users who have limited knowledge of the Earth Observation domain in general, and in satellite imagery in particular. Users are accustomed to their own domain of activity and the associated terminology and should not have to learn many EO domain specific terms.