Epistematica was founded in 2005 for the application of the Semantic Web Standards theorized by Tim Berners-Lee in the mid-1990’s.

Epistematica aimed at operating in the field of Knowledge representation – the formalization of data semantics, by the means of  Description Logics, which are sub-domains of the Aristotelian First Order Logics, and of markup languages XML-type.

Our goal was to build Knowledge-driven Systems based on semantically enriched Databases – Knowledgebases known as ontologies. Those Databases contain decidable knowledge, o rather a kind of knowledge directly usable by Automatic reasoning technologies.

When the time for choosing the company name came, we needed to find a term able to express in word what we did.

In Computing, a possible transposition of those two concepts would be:

Epistematica aimed at building computing systems based on the Epistéme-type Knowledge.

In the Italian language, epistemàtico [adj., from epistème, n.] means deductive.  From the male adjective it is possible to derive the female noun, epistematica, which is absent from the Italian lexicon.

Borrowing from the coinage of the term informatics, the word epistematica can be considered a neologism from the two terms epistè(me) and (auto)matica, where epistème means “decidable knowledge for computing purpose” – not for human use – and automatica can be translated into automatics.

The term epistematica, which could be  “knowmatics” in English, can be now used to address issues like Automated reasoning for inferential processes, Semantic technologies for Knowledge representation or their applications such as Knowledge-driven Systems. 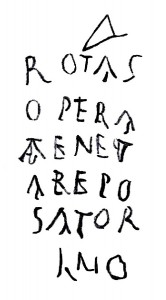 Having to associate the term Epistematica with a logotype suitable for a registered trademark, we tried to couple the term “epistematica” with an iconography able to evocate the surround concepts

We wanted to combine the term Epistematica with a logotype suitable for a registered trademark. We chose the so-called “magic square” image.

The magic square is a palindrome containing the words rotas, opera, tenet, arepo, sator. For the last two millenniums, it has puzzled every archaeologist who has tried to understand its cryptic semantics.

It can be regarded as a “proto-ontology” – a knowledge representation of an unknown wisdom – that uses terms of a natural language as we do today with the semantic technologies for computers.

The magic square used on the trademark is a free reinterpretation of the oldest graffiti discovered at Pompeji in 1936.